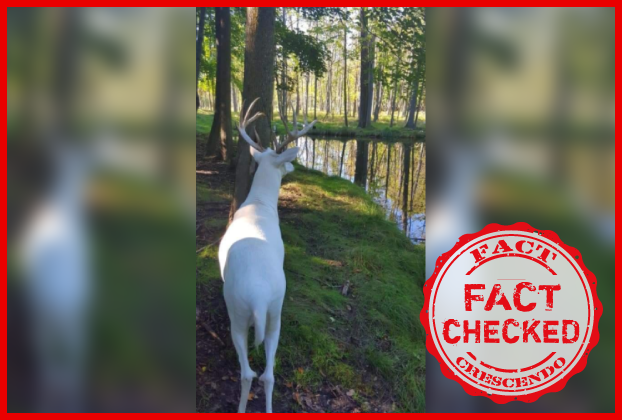 As more people are confined to their homes during the COVID-19 outbreak across the world, several reports also document increased wildlife activity in urban areas. While several stories have been refuted as false  by leading media outlets like National Geographic, others have been verified and proven to be true.

In this light, we noticed a recent viral Facebook post by a Sri Lankan social media account belonging to Upul Rodrigo which claimed that a white/albino Sambar was spotted at the Seethawaka Wetlands in Sri Lanka as the area no longer has a bustle of human activity.

A screenshot and links to the post, which appeared on 23rd April with the text “මිනිස් ක්‍රියාකාරම් නොමැතිවපාලුවට ගිය සීතාවක තෙත්බිම් උයනට පැමිණි සුදු ගෝනා” meaning “With the lack of human activity a white Sambar has made a visit to in the Seethawaka Wetlands” and shared over 1000 times as seen below:

While the post itself could have been of a satirical nature, it is possible that not all viewers will take the content in that spirit, hence requiring a detailed fact check on its authenticity. Some of the comments on the post itself also seem to have taken the narrative in a spirit of satire as can be seen below:

While it may be obvious that the narrative was meant to be a joke, the high number of shares are worrying hence we did a fact check on the image and its accompanying claim to ascertain its authenticity.

We began with a simple Google Reverse Image search which indicated that the very same image was posted in 2017 by a Russian language entertainment site called FISHKI.NET where citizens often share their personal photos. The image, posted on 28th August 2017 and mentioning Russian viral image site Imgur as the source, can be seen below:

While the date of the image has no connection to any recent activity, nor taken in Sri Lanka, we investigated the supposed facts presented in the claim to find out if there has been any spotting of a white or albino sambar in the country.

The information we found noted that there has been much speculation about the possibility of albino axis deer (commonly known as spotted deer), but no reference was made to an albino Sambar. One post from earlier today (April 30th) from a safari tour organizer also claimed that the Kaudulla National Park had albino axis deer while no evidence is available as proof to date. The post can be seen below:

This information seems to have been taken directly from an article in the Lankapura website, which also tells us that “Kaudulla is also believed to be the only national park in Sri Lanka that has albino axis deer, though the only evidence found so far is an orphaned deer calf found in the park.” Kaudulla National Park and Seethawaka Wetlands are many hours apart as seen shown below on a Google Maps search

Yet another article published in LankaViews on 12th September 2018 refers to rare white deer being found killed on an estate near the Sinharaja Forest. The article, which was published with photographic evidence, can be seen below:

We contacted a tour guide from Sinharaja Forest and confirmed the incident from 2018. Yet the species of deer is not a Sambar. Also, the Sinharaja Forest and the Seethawaka Wetlands are located nowhere near one another, yet again refuting the contents of the original viral posts by placing the location extremely far apart from one another Google Maps

Further, it should also be noted that the possibility of the existence of this many albino deer in a landmass as small Sri Lanka within a few years of each other is highly unlikely. A 2001 entry in the Encyclopedia of Genetics states that the estimated frequency of albinism is about 1 in every 20,000 animals in a species.

It should also be noted that Sambar are generally nocturnal animals, dwelling in open grasslands as per a 2016 article in the Serendib magazine. The viral image shows the animal in daylight in a thick forestland area which again makes the sighting very unlikely.

As the original image from the viral post was in fact from 2017 and not 2020, as well as the fact that the location and facts detailed were all proven to be untrue, lead us to declare this post false.

Title:Did An Albino Sambar In The Seethwaka Wetlands? Here Is What We Found Out. 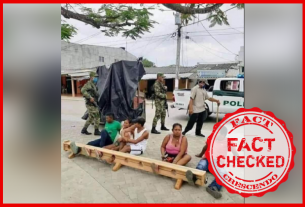 Does This Image Show Lock Down Protocol Violators Physically Punished by Nepal Police? Here’s the Truth… 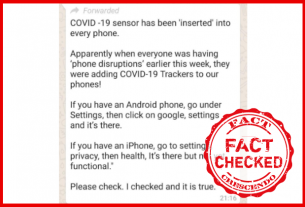 Covid-19 Sensor Has Not Been Inserted Into Your Mobile Phone… Here’s The Truth!