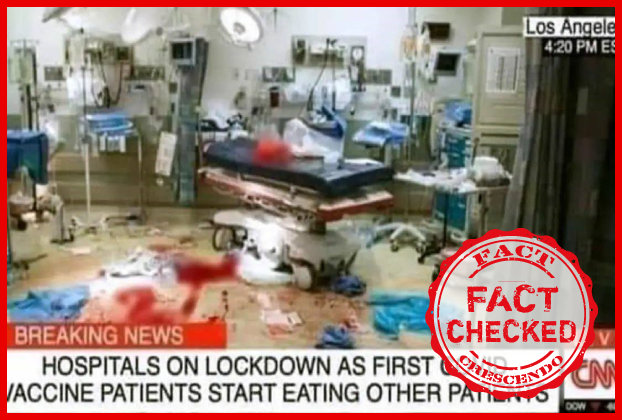 During the initial months of COVID-19 pandemic, a number of false claims were circulated alleging how people from different parts of the world reacted to the deadly virus. Now as some countries are trying out the new vaccines, similar claims on how people are reacting to the vaccines have emerged.

A photo is being shared widely among Tamil Social Media users in SL, and it is being claimed that this is the photo of the first batch of participants who were administered the vaccine. These posts further claim that the participants started eating each other and allegedly from a hospital in Los Angeles.  However, our investigation reveals that this is yet another fabricated hoax.

A Facebook paged called Kozhi Kari had shared an image of a blood splattered hospital room claiming to be from Los Angeles. The photo is in the form of a CNN breaking news update.  The news bulletin read as “Hospitals on lockdown as first COVID vaccine patients start eating other patients” was published on 26th of December 2020 (26.12.2020) as seen below.

Number of users had shared similar content as well.

First, we observed the comments on these viral posts and noticed that many users had identified the news to be fake news. A number of users had requested such content to be removed, as it could lead to unnecessary fear among public who are getting ready for vaccination.

“The trauma bay in the emergency department at Temple University Hospital after resuscitation efforts failed,” the caption of the image reads.

In the article, Medical student Curran mentions his experience of treating gunshot victims in Temple University Hospital, and how those horrific scenes continue to haunt him.

Therefore, from our research it is clear that the image used for edited CNN news bulletin claim was taken back in 2019 at a hospital in Philadelphia and has no relation to current COVID-19 vaccine phase.

We did not find any news report about hospitals being locked down due to patients eating each other either from USA either.

From our more investigation, we confirm that the viral claims appearing as CNN breaking news, claiming hospitals were locked down after patients turning into zombies and eating each other as a result of COVID-19 vaccine, are false.

These posts aimed at creating unnecessary fear among public are morphed images made using a 2019 image from a hospital in Philadelphia showing the aftermath of treating victims of gunshot violence.

Title:Do Not Fall for This Hoax of People Turning into Zombies Due to COVID-19 vaccine! 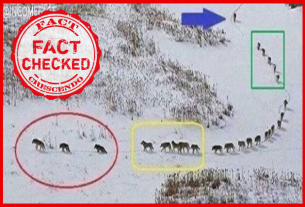 According To This Viral Post, The Weakest Wolves Lead Their Pack. Here’s The Truth 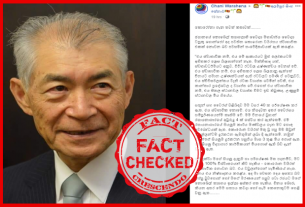 No. Japanese Nobel Laureate Professor Tasuku Honjo did not say Coronavirus was made in Wuhan Lab… Here is the truth… 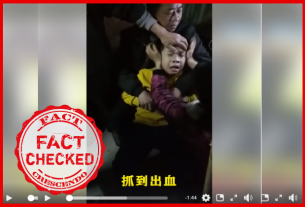