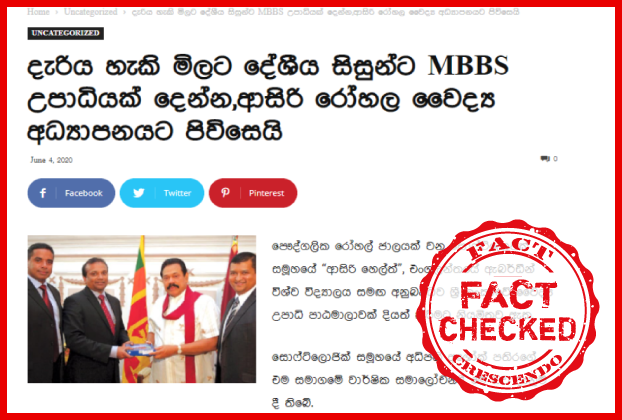 While university/higher education is provided free of charge by the government of Sri Lanka, many private universities also offer paid degree programmes in the country. Medical education has been a bone of contention locally, especially a few years ago when a private university, namely SAITM attempted to set up a private medical faculty in Malabe. In 2016 the Sri Lanka Medical Council (SLMC) and the Government Medical Officers’ Association (GMOA) both publicly opposed the provisional registration of medical graduates from SAITM to practice as doctors in Sri Lanka. Additionally, students at state universities protested the opening of the hospital, which eventually resulted in SAITM’s hospital being taken over by the government, the university being abolished and its students integrated into the Kotalawala Defence Academy (KDU) in 2018. In this sense, private medical education is a complex arena to enter into in Sri Lanka.

With this in mind, a recent news article about the Softlogic Group’s private hospital chain Asiri Health entering the private medical education landscape caught our attention. Published on 4th June 2020 in the Sinhala website Lakdivpuwath, the article goes on to mention discussions being held with the University of Aberdeen (UK) and the Softlogic Group. The Softlogic Group Chairman Ashok Pathirage had made an announcement at the company’s annual review, saying “We are currently in talks with the University of Aberdeen. We are planning to develop a local MBBS degree at an affordable cost to local students“.

A screenshot of the article can be seen below:

We deemed a fact check necessary to discover if it was indeed true that another private institution was attempting to set up paid medical education in the country after the complications that arose with SAITM.

We began our fact check with a Google Reverse Image Search of the photograph presented in the article featuring the Softlogic Group’s Chairman and PM Mahinda Rajapakse among others. The results indicated that the image was in fact run with the Asiri Health story in other publications including in The Leader on 6th June 2020.

Further searches revealed that the information is also not entirely new news. An Ada Derana article from August 2018 and number of other reports had already announced that Softlogic’s healthcare arm Asiri Health would be teaming up to deliver a MBBS programme as can be seen below:

A further search into the University of Aberdeen’s own website indicates that Asiri Health and the IIHS (International Institute of Health Sciences) were both named the university’s partners in Sri Lanka. A screenshot of the partner page for Sri Lanka can be seen below:

Additionally, we contacted IIHE in order to get an official statement from the institution on the partnership between the University of Aberdeen and Asiri Health in Sri Lanka. We received the following information:

This details can be found in the University of Aberdeen Website as well describing the curriculum, entry requirements, Fees, Partnerships and FAQs.

Below is the fee structure listed in the Aberdeen University Website, which amounts to 164,500 Pounds for entirety of 5 years which approximates close to 4 Crores LKR as claimed by many social media posts and articles, hence could not be deemed affordable to average Sri Lankan

Based on the official information we received, it is clear that local media have been publishing misleading information. While it is true that the University of Aberdeen is partnering with Asiri Health, it is less a Sri Lankan initiative and more one of the UK based universities.

The University of Aberdeen selected Asiri as an international hospital to place their medical students for the last 2 years of their degree. This was done with the aim of increasing their international student intake in the region as well as to provide local students with international exposure.

We further learnt from IIHS that with the entry criteria listed for the program it would be available only for limited number of students and are currently on the lookout for prospective students and are expecting around 30 students for the first batch from Sri Lanka.

Based on our findings it is clear that the articles present in local media are misleading in nature. No new private medical university is being set up in Sri Lanka – it is rather a case of Sri Lanka being selected as a placement location for the last 2 years of the University of Aberdeen’s MBBS programme. 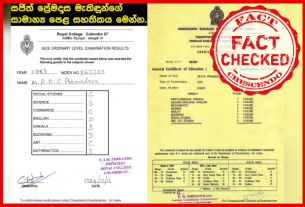 Arnold Schwarzenegger did not sleep on the street in front of his statue, because a hotel denied him free room

This is not the rare Nagaraja flower from the Himalayas; Find out the truth!

Fake Alert: Japan did not set off fireworks intended for Tokyo Olympics 2020 as shown in this viral video