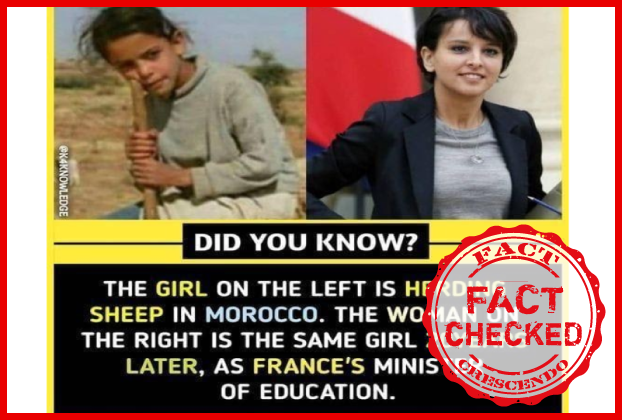 A social media post has been circulating widely around the world across social platforms with regards to the current Education Minister of France Najat Vallaud-Belkacem, claiming that she was once a sheep herder in Morocco. The post, first seen on popular social media group The Science Facts appeared with two photographs side by side; one featuring a young girl holding a staff and the second with Belkacem herself. The accompanying text says: DID YOU KNOW? The girl on the left is herding sheep in Morocco. The woman on the right is the same girl 20 years later, as France’s Minister of Education.The post can be seen below:

Similar posts, using different photos of Belkacem have been featured by other Facebook users as can be seen below:

A Google Search indicated several other similar posts circulating around the world as can be seen below:

Due to the widespread use of the claim, we deemed it necessary to do a fact check to verify its authenticity.

We began our fact check with a Google Reverse Image search of the photograph on the left featuring the little girl with the staff. While the topline results indicated the same associations with France’s Education Minister, a deep dive into the search results prove that the image was taken in 2015 and published in a UNICEF document on children in Morocco.

Photographed by Moroccan photographer Giacomo Pirozzi, and published on the 26th page of the UNICEF document, it features an 8 year old girl named Fauzia who had to quit school due her parent’s inability to afford an education for her. The original image can be seen below:

Considering that the image was taken in 2015, it is clear that this is not a photograph of Najat Vallaud-Belkacem, nor taken 20 years ago.

We next searched for images of Belkacem to ascertain the authenticity of the second photograph in the viral post. Our search indicates that the image is authentic. A photograph from Najat Vallaud-Belkacem’s official Wikipedia page can be seen below next to the viral image:

We next looked into the claim of Belkacem once being a sheep herder. Her official website, https://www.najat-vallaud-belkacem.com/ features an extensive interview given to the famous Porter magazine in 2017 where she discusses her childhood:

“Reports in the French press that I was a child shepherd hold a grain of truth: I was born in Morocco and lived in Bni Chiker, a mountain hamlet in the north. My early childhood was spent as a country girl living with near and extended family, all under one roof. We were quite poor. I helped my grandfather with the goats, drew water from a well, and spent most of the day in flip-flops. I don’t have many specific memories, but I carry with me the feeling of a happy family life. Then, in 1982, when I was four, we came to France to join my father, who had moved here in 1975 to work in construction.” said Belkacem. Some screenshots of the published interview can also be seen below:

Belkacem has given similar interviews confirming her birth and childhood days in a Moroccan hamlet and helping her grandfather who was a goat herder. Hence the fact made in the claim is somewhat correct, while the actual reference is to goat herding and not sheep herding. It should also be noted that Belkacem is not the current Minister for Education – she held the post from 2014 to 2017 and was the first woman to hold the office in France. The current minister for education in France is Jean-Michel Blanquer.

We conclude that the image of a shepherd girl circulating globally on Facebook is not a photo of the former French minister of education. While the actual claim made is closer to the truth, when taking the entire post into consideration, we can declare it misleading and partly false.
Further it should be noted that this viral post has been refuted by several other repeated fact checking organizations including by our own Sinhala desk.

Title:Was France’s Education Minister Once A Sheep Herder In Morocco? 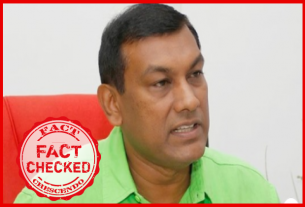 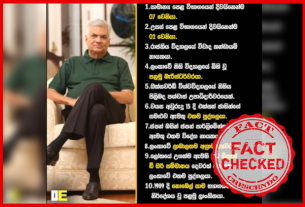 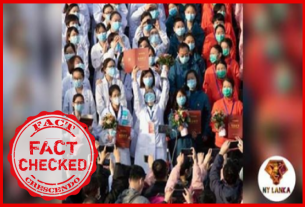 Did the last COVID19 Infected Patient In Wuhan get Discharged..? Here’s The Truth!