With the advancement in technology, photography and photo editing techniques have evolved considerably. Also the number of photography hobbyists have also been on the rise. Hence, there are millions of photos being posted on various social media platforms and some of them go viral within hours.

Fact crescendo Sri Lanka team came across such an incredible photo of a Cabin, sitting on the top of an isolated rock. The photo that was being shared as a real photo was found to be edited for creative purposes. Let’s see the various posts about this photo and how we found out that the photo is not real.

A Facebook user named, Niroshan Hemantha, posted a photo captioned “Abandoned cabin in Colorado” on a Facebook group called “MYSTERIES OF THE ABANDONED”. The image depicted a cabin house, on top of tall and isolated rock structure, seeming to be in the middle of a forest covering surrounded by hills, along with the caption 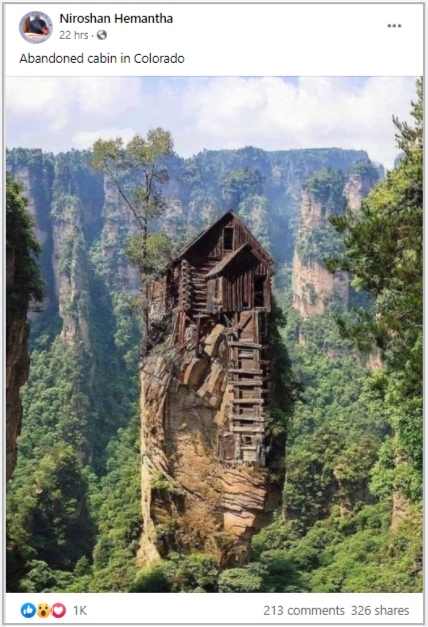 We noticed few other users had also posted the same image with similar narratives. However, some of the users had commented that this was not a real structure and a digitally manipulated artwork. Hence, we decided to find the truth behind this claim.

Also Read: Fact Check: Is this Really an Abandoned Jet in an Indonesian Forest? Find out the Truth!

First, we tried to identify the source of this photograph using Reverse Image Search. The search along with key words, yielded two places from different parts of the world, which had same components of the claimed image.

One result as seen below indicated that unique, isolated rock structure was that of a sandstone rock mountain in Zhangjiajie National Forest Park, Hunan, and China.

In order to ascertain the location we did a keyword search and found many other images of the same unique rock formation from Zhangjiajie National Forest Park. Below is an iStock image of the same rock from a different angle.

A video of Crystal Mill can be seen below.

Furthermore, through behance.net under the Photo Manipulations (2019) we noticed the image of the photo cabin which went viral. The creation belongs to a digital artist called Justin Peters based in Germany. A high resolution version of his creation can be seen on his website, titled “MOUNTAIN HOME” and on his Instagram account.

Follow us and stay up -to- date with our latest fact checks.

According to our investigation, it was found out that the viral photo claiming to be a cabin on top of an isolated rock structure was actually a digital photo manipulation created by placing Crystal Mill in Colorado on the image of a sandstone pillar at Zhangjiajie National Park, China.

Is this the clearest photograph of the Sun taken by NASA? Here’s the truth!

Title:Is This an Abandoned Cabin on a Huge Rock in Colorado? Find out the truth…

Best photograph of the century ?

Fact Check: Is this a photo taken from Mars of Earth, Venus and Jupiter aligned together? Here is the truth…

FACT CHECK: Were prices of Milk Powder Increased before Government Decision To Raise Prices? Find out the Truth…

FACT CHECK: Thousands of Indians flocked to Delhi airport to welcome Yohani? Find out the Truth…

“I Am Alive, But In Pain!” Says Safia Ferozi Dismissing Rumors About Her Death…